The Chronicles of Narnia

The Chronicles of Narnia is a series of seven fantasy novels for children written by C. S. Lewis. It is considered a classic of children's literature and is the author's best-known work, having sold over 120 million copies in 41 languages. Written by Lewis between 1949 and 1954 and illustrated by Pauline Baynes, The Chronicles of Narnia has been adapted several times, complete or in part, for radio, television, stage, and cinema. In addition to numerous traditional Christian themes, the series borrows characters and ideas from Greek and Roman mythology, as well as from traditional British and Irish fairy tales.

The Chronicles of Narnia presents the adventures of children who play central roles in the unfolding history of the fictional realm of Narnia, a place where animals talk, magic is common, and good battles evil. Each of the books (with the exception of The Horse and His Boy) features as its protagonists children from our world who are magically transported to Narnia, where they are called upon to help the Lion Aslan save Narnia. 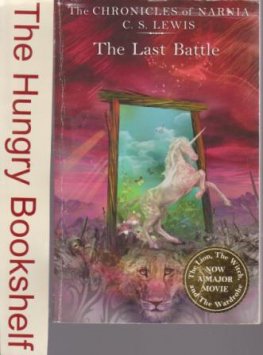 LEWIS, C.S : #7 The Last Battle : The Chronicles of Narnia PB

LEWIS, C.S : The Horse and His Boy #3 : Narnia Softcover Book